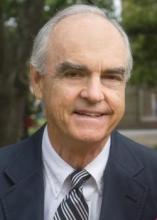 My research, over the past few years, has dealt with the reading preferences of eighteenth-century British army officers.  What books on war did those officers prefer?  What might those books tell us about the officers, their development as soldiers, and the wars that they waged?  This research will come to fruition this fall with the publication of Books and the British Army in the Age of the American Revolution (Chapel Hill, 2010).  Beyond that, I have been and continue to be interested in, the relationships between theory and practice of eighteenth-century warfare.  I have explored those relationships in a number of essays that I am drawing together for a book.

I am currently teaching a freshman seminar (Thomas Jefferson and the Uses of the Past), directing one dissertation, and reading another three or four dissertations in early American and United States history.